Smithing in One Hour One Life refers broadly to crafting objects in a Adobe Kiln or Forge. This is usually done with clay, Iron Ore or Gold Flakes as a base material, and requires kindling or charcoal, and a source of fire. Objects that can be made include tools, rails, lock and keys, crowns, dice and bells

Becoming a blacksmith is a long and difficult process, but very rewarding. Creating steel tools is a major accomplishment for a civilization, and will greatly increase your likelihood of survival, pushing your tribe to the next level of existence. Before starting the smithing process ensure you have a steady supply of food.

Smithing is best done in pairs so that someone can keep fires lit and charcoal cooking but it's doable solo if you've got an organized space and a lot of trees and patience. A good way to practice smithing is within the tutorial. One golden rule of any town is to NOT DISTURB THE BUSY BLACKSMITH. Certain in-game objects, such as engines, are absolutely vital to a town's survival, and very few players know how to make them. Entire towns have died out because the village blacksmith was too annoyed to finish an engine and no one else knew how to do so. 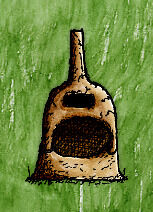 A kiln is required in early civilization in order to make bowls and plates used in farming and cooking. It can only be used to fire clay, and can also make charcoal. Adding bellows to a kiln will turn it into a forge.

You will need 3 adobe plus one extra for later on. To make adobe, combine clay with a Reed Bundle. As reed bundles can't be stored in a basket or backpack, it's more efficient to combine the ingredients at the tule reeds in order to avoid multiple trips. It is also possible to get one extra adobe by using a shovel on tule stumps.

Choose a nice open area to place your kiln, away from the main farm so you will have space to work. Place one adobe where you want your kiln, and hit it with a round stone to get Adobe Oven Base. Adding another adobe will make Adobe Oven (used in cooking) then one more to get Adobe Kiln. Set your remaining adobe directly behind the kiln for later use.

Before you light your fire and start burning through kindling, make sure you have all the materials and tools you need. Once you are ready, you can build your fire. Use a Long Straight Shaft on your fire to get a firebrand. Use the firebrand on the kindling-filled kiln to get Firing Adobe Kiln. You must now work quickly, as it will go out after 30 seconds. Pick the wet clay plates, bowls and nozzle up in the tongs and use them on the firing kiln, then put them down and move on to the next one. Prioritize the clay nozzle, and at least one each of clay bowl and plate.

If you are quick, you will have time to use the spare adobe on the kiln to get Firing Adobe Kiln Sealed. After 30 seconds, when it stops smoking, you can remove the adobe and pick up the charcoal with a basket. Dumping a basket of charcoal on the ground results in a Big Charcoal Pile, which contains three individual pieces of charcoal. You will need charcoal to fire a forge, and to add to create steel. A full basket of coal can be placed back into a forge, but cannot be returned to a kiln.

You will go through a lot of charcoal when smithing. Building a second kiln will speed the process.

A forge is just an Adobe Kiln plus bellows. You will need to use the kiln to fire a Wet Clay Nozzle for bellows, and to create charcoal before you can make and use a forge.

To make bellows, you will need a Wooden Tongs, Empty Water Pouch, and a Clay Nozzle.

Take a Straight Branch and use a sharp stone to get Long Straight Shaft. Now use a flint chip to get wooden tongs. Make sure you have at least one set of tongs left over after making bellows.

Snare a rabbit (choose a rabbit hole with babies) and skin the dead rabbit with a flint chip, remove the fur.

Cut a skewer from a sapling using a Sharp Stone, and use the skewer on the Skinned Rabbit to get Skewered Rabbit. You will need to cook it on Hot Coals (not fire!), then eat the Cooked Rabbit to get the Rabbit Bones. Pick up the bones to get a single Rabbit Bone, and use a flint chip on the bone to get Bone Needle. Combine the needle with a piece of thread made by combining two Milkweed, and you will have Needle and Thread.

Use a flint chip on the Rabbit Fur to get Four Pieces of Cut Rabbit Fur. Use the needle and thread on the cut rabbit fur, and you will get an Empty Water Pouch. Combine the tongs with the empty water pouch to get Bellows Without Nozzle.

Use a skewer on some clay to get Wet Clay Nozzle, fire this using tongs in a Firing Adobe Kiln to get Clay Nozzle. Combine the fired clay nozzle with the bellows without nozzle to get Bellows.

Make sure you have all the materials and tools you need. Then use a firebrand on the charcoal-filled forge to get Firing Forge. You must now work quickly, as it will go out after 30 seconds. Pick the Iron Ore up in the tongs, and use them on the firing forge. Set the Hot Iron Bloom down on a flat rock, and hit it with a round stone to get Wrought Iron. Remove the wrought iron to keep using the flat rock.

Wrought Iron is used to make Steel Ingots, and later, can be used to make parts for Newcomen Pump, Multipurpose Newcomen Engine, as well as a Fuel Tank.

Hitting a Hot Wrought Iron on Flat Rock with a Smithing Hammer will make:

Combine charcoal and Wrought Iron in a Clay Bowl, and seal with a Clay Plate to get Unforged Sealed Steel Crucible. Use tongs to fired the crucible in the forge and get hot forged steel crucible. After 10 seconds, when it turns into Forged Steel Crucible, it can be opened to get steel ingot.

Note: A crucible can also be filled with Clump of Scrap Steel (made from two Broken Steel Tools) or various other steel tool pieces such as Steel Axe Head, or Steel Chisel.

Steel ingot is the basis of all steel tools. You will first need a Smithing Hammer to make the rest of the tools.

The Smithing Hammer now replaces the stone in the above recipe to craft various tool heads.

Hit the hot steel ingot multiple times with the Smithing Hammer to make different tool heads. If you make the wrong tool head, place it into a crucible to melt down and try again. Hitting a Hot Steel Ingot on Flat Rock with a Smithing Hammer will make:

Most tool heads are combined with short or long shafts to make their respective tools.

Some products of the basic smithing progression may require additional steps (beyond adding a basic handle) which can be seen on their individual pages:

Crowns can be returned to gold ingots by hitting with a smithing hammer.

Limestone is a material found in the badlands which is used to make cisterns, Plaster Walls, Paint, and tacos. Firing a Bowl of Limestone at a Firing Forge will give Quicklime. Adding a Bowl of Water will then make Plaster.

Copper Ingots are made from Malachite and Charcoal, and are fired in a crucible just like Steel Ingots. They are used to make Copper Pot, Copper Foil, and Copper Rod.

Zinc Ingots are made from Calamine and Charcoal, and are fired in a crucible just like Steel Ingots. They are used to make Zinc Rod.

Glass is made from Glasswort, Limestone and Sand. A Blowpipe can be used to make a bulb for Light Bulb and Coherer.

Once the basic smithing progression is mastered, the next tier uses Wrought Iron, Steel Ingot, Copper Ingot and Zinc Ingot to construct machine parts which can be assembled into various tools as listed below. A Multipurpose Newcomen Engine has three attachments with different functions, necessary to build additional machine parts.

Carbon Filament requires Firing Adobe Kiln to craft (It was not included above, to avoid confusion).