From One Hour One Life Wiki
(Redirected from Mouflon Bones)
Jump to: navigation, search 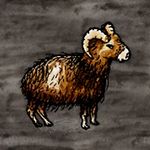 Mouflon are animals found in the badlands that can be domesticated into sheep. They can be killed using a bow and arrow to get Dead Mouflon and then skinned (with a knife or flint chip) for mouflon hide (wearable) and butchered with a knife for four raw mutton and Mouflon bones.

If a mouflon with a lamb is hunted, the Mouflon Lamb can be led with a rope and fed with a Bowl of Gooseberries and Carrot (or Bowl of Mashed Berries and Carrot) to grow up (after 30 seconds) into a Domestic Mouflon, if not fed, it will die (after 1 minute). Soon after it grows, the Domestic Mouflon will birth a domesticated lamb, which when fed will turn into a sheep.

Unlike wild mouflon, domestic mouflon can only be killed with a knife, then can be skinned and butchered as usual.