From One Hour One Life Wiki
(Redirected from Four Wing Struts)
Jump to: navigation, search 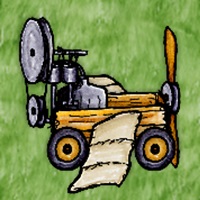 Crude Airplane is a rideable vehicle which allows instantaneous (more information required) flight as well as fast transport (300% walking speed) and storage (4 large items). It is an upgraded version of a Crude Car. A Crude Airplane can only be used after age 16. It requires Kerosene to run.

Cut four individual Small Curved Shafts to get Wing Struts. Combine two together, then combine two pairs of struts to make four wing struts. Add a Bolt of Wool Cloth to the struts, and a Bucket of Liquid Latex to rubberize the Wing. Combine two rubberized wings to make a pair.

Craft a Propeller by adding Boards to a Small Pulley. Combine this with the Pair of wings to create an Airplane Kit

An airplane can be used as a car (giving 300% walking speed). Or using with a Landing Strip allows the user to fly to other landing strips instantaneously (It will search for a landing strip in a 180º angle to spawn there with the pilot; it is unknown whether it picks a random landing strip if there are 2 or more or if it picks the closest)

A Landing Strip is created by adding Bowl of Plaster to a Stone Road. It decays into a Flat Rock after 2 hours, or can be removed with a Steel Mining Pick.